The energy limit we are running into is a cost limit. I would argue that neither the Republican or Democrat approach to solving the problem will really work.

The Republicans favor “Drill Baby Drill”. If the issue is that the price of oil extraction is too high, additional drilling doesn’t really fix the problem. At best, it gives us a little more expensive oil to add to the world’s supply. The Wall Street research firm Sanford Bernstein recently estimated that the non-Opec marginal cost of production rose to $104.50 a barrel in 2012, up more than 13 per cent from $92.30 a barrel in 2011.

US consumers still cannot afford to buy high-priced oil, even if we extract the oil ourselves. The countries that see rising oil consumption tend to be ones that can leverage its use better with cheaper fuels, particularly coal (Figure 1). See Why coal consumption keeps rising; what economists missed. The recent reduction in US oil usage is more related to young people not being able to afford to drive than it is to improved automobile efficiency. See my post, Why is gasoline mileage lower? Better gasoline mileage? 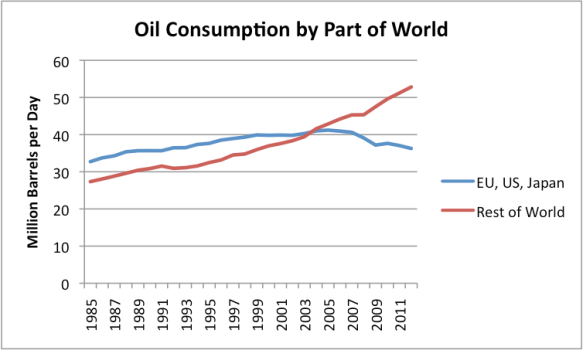 Figure 1. Oil consumption by part of the world, based on EIA data. 2012 world consumption data estimated based on world “all liquids” production amounts.

The Democrats favor subsidizing high-priced energy approaches that wouldn’t be competitive without such subsidies. Government debt is at 103% of GDP. It is hard to see that the government can afford such subsidies. Also, it is doubtful that the supposed carbon-saving benefit is really there, when all of the follow-on effects are included. Buying wind turbine parts, solar panels, and goods that use rare earth minerals (used in many high-tech goods, including electric cars and  wind turbines) helps to stimulate the Chinese economy, adding to their coal use. Furthermore, the higher taxes needed to pay for these subsidies reduces the spendable income of the common worker, pushing the country in the direction of recession.

So what do we do as an alternative, if neither the Republican or Democrat approach works? I would argue that we are dealing with a situation that is essentially unfixable. It can be expected to morph into a financial crash, for reasons I explained in How Resource Limits Lead to Financial Collapse. Thus, the issue we will need to mitigate will be debt defaults, loss of jobs, and possibly major changes to governments. If we are dealing with a financial crash, oil prices may in fact be lower, but people will still be unable to afford the oil because of other issues, such as lack of jobs or lack of access to money in their bank accounts.

Because neither political party can fix our problem, I expect that most of our responses will necessarily be individual, personal responses. These are a few ideas:

1. Get out of debt situations, if it is easy to do. There are a lot of people who own stocks on margin, or who own an expensive house with a big mortgage on it. Now, with prices of stocks and homes both higher, would be a good time to get out of both types of debt. Sell the stock or buy a less expensive house, without the mortgage.

Equities and home prices both seem to be inflated now, indirectly because of Quantitative Easing. Some recent analysis suggests that real (that is, inflation adjusted) interest rates are rising partly because inflation is falling.  The reason that inflation is falling is because oil prices are lower (Figure 2). Comparing the first four months of 2013 with the first four months of 2012, oil prices are about $9 per barrel lower. Oil prices are lower because of reduced demand due to economic contraction, especially in Europe. 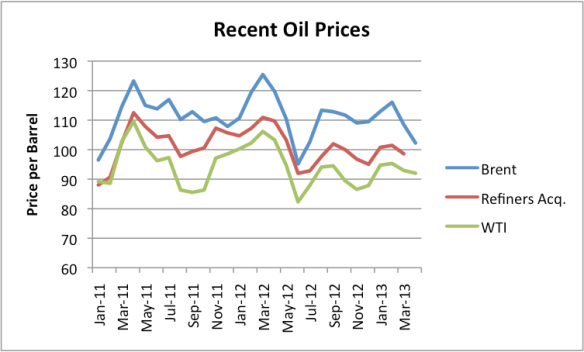 In the past month, there has also been an uptick in interest rates (even apart from the declining inflation component). According to the Wall Street Journal, “Yields on the benchmark 10-year U.S. Treasury note now stand above 2.1%—still low by historic standards, but nearly half a percentage point higher than at the start of May.” Mortgage rates are also reported to be half a percentage point higher than they were six months ago.

There are a number of risks with rising real interest rates and falling inflation. One is that the higher interest rates will trigger lower stock prices and lower house prices. Another is that deflation will continue, making debt payback more difficult. If this happens, it is something that the Fed can’t handle with its monetary easing policy. Interest rates can go to zero, but not below. A third issue, especially if interest rates rise further, is the adverse impact on the US government financial situation.

2. Reduce your expectations about what investments can do for you. Dmitry Orlov, who has had experience with the collapse of the Former Soviet Union, made the remark, “There are two kinds of investments: those that lose all their value at once, and those that lose value slowly.” Paper investments are a particular problem, because they can decline in value very quickly if conditions change. Even real estate can be a problem, though, because governments can take away what you thought you owned, or raise taxes to a level that you cannot afford. If you buy something and have to move, but cannot take the object with you, you will likely lose the value you invested. The only things that are really yours to keep (at least until your declining years) are skills that you learn.

3. Take up a hobby that will provide food for your family (planting a few fruit or nut trees, adding a garden, raising a few chickens, or learning to hunt/fish). Taking up hobbies such as these provide several functions: They provide a diversion away from the problems of the day, and let you feel like you are doing something helpful. They may actually provide a cushioning effect, if there is a sharp downturn. Taking up such hobbies can provide a useful skill for the future. In some cases, it may make sense to purchase land for purposes such as these. If considering doing this, a person should take note of items (1) and (2) above. It takes quite a long time to get started, and you can’t take the improved land with you, if you have to leave.

4. Learn to appreciate nature, family, and simple joys that can’t easily be taken away. It is possible to be happy, regardless of circumstances. We can find many good things in every day. Obsessing over the future is not really helpful. Don’t tie your happiness to having more “stuff”; you are likely to be disappointed. Learn to sing happy songs, or how to play a musical instrument. Or memorize uplifting poetry or religious writings.

5. Build a network of friends. If things go downhill, we can’t expect to use a gun to ward off intruders, night and day. If nothing else, we will run out of ammunition. Over the long term, the approach that is likely to be successful is working together with other community members toward a common goal.

6. Learn new skills, if you are concerned about job loss. Try to think of what will be needed in a lower-energy world. People will always need dentists and midwives, regardless of how poor they are. Buggy whip manufacturers went out of business long ago. Maybe we will need them back!

7. If you want to develop larger-scale plans (such as for cities or regions), keep them cheap and easy to implement. Governments are already running short of funds to implement plans. Look for approaches that are inexpensive to put in place, such as car-sharing plans. Alternatives that worked years ago, such as boats and canals, might be considered as well.

8. Aim for a flexible approach to problems. We don’t know things will turn out. Water may be in very short supply in one part of the country. Or job opportunities may open up in a place far from home. Even more than in the past, we are likely to need to be able to change our plans on short notice.

444 thoughts on “Energy limits: Is there anything we can do?”