Delusions of Finance: Why most models are wrong

I wrote this post almost a year ago, and originally posted it at The Oil Drum. It is a write-up of a talk I gave in October 2009 at the Biophysical Economics conference in Syracuse, NY.

In October 2009, I participated in the 2nd International Biophysical Economics Conference at SUNY-ESF in Syracuse, New York. Charlie Hall had written to me, inviting me to come and give a talk. Specifically, he wanted me to go back to my post from January 2008 called Peak Oil and the Financial Markets: A Forecast for 2008 and explain why my forecasts had turned out pretty close to correct, while many others widely missed the mark. The title he suggested for the talk was Delusions of Finance.

My financial forecast really has implications for beyond 2008, so I added some more forecasting thoughts as well. In this post, I would like to share this presentation with you.

I am a casualty actuary by training and spent many years doing forecasting and modeling as an insurance company employee and later as a consultant to insurance companies. Many of these companies were small medical malpractice insurance companies that provided insurance for a group of hospitals or physicians. Medical malpractice claims are notoriously slow to be reported and to be paid, so we had to forecast many years of reporting and payments, (and corresponding investment income). These models were used both for determining appropriate insurance rates and for determining balance sheet reserves for these companies. Quite often I was involved in putting together models for proposed new companies in order to estimate likely capital requirements. I was also prepared a lot of estimates of the likely impacts of medical malpractice reforms.

All of this didn’t really give me any special training for making financial forecasts relating to peak oil, but it did give me a lot of practice with making forecasts and trying to think outside the box. I needed to figure out what was unique to each situation, and figure out a way to model it. I hadn’t gone through the standard MBA training, but I had bumped up against a fair amount of it along the way.

My background goes back far enough that I had a chance to see how badly insurance companies fared back in the 1974 period, when oil shocks affected insurance companies. One of my former employers went bankrupt, and another one nearly did. I could see that if a similar situation happened now, other financial companies would likely be affected as well.

Quite a bit of the rest of this presentation is fairly self-explanatory, especially if you have seen some of my other presentations, so I won’t provide too much in the way of comments.

This is a link to the full post. You may want to read it, if you haven’t previously. 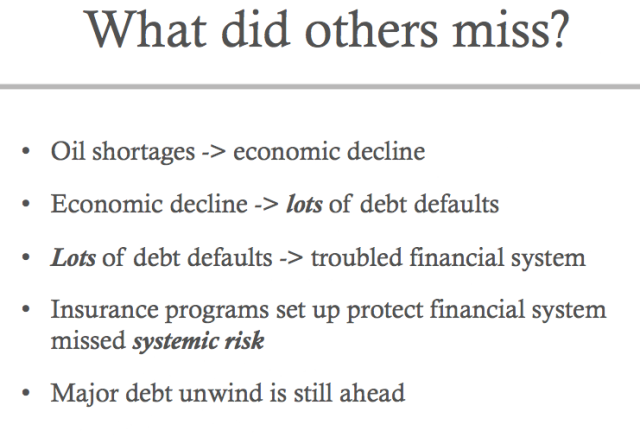 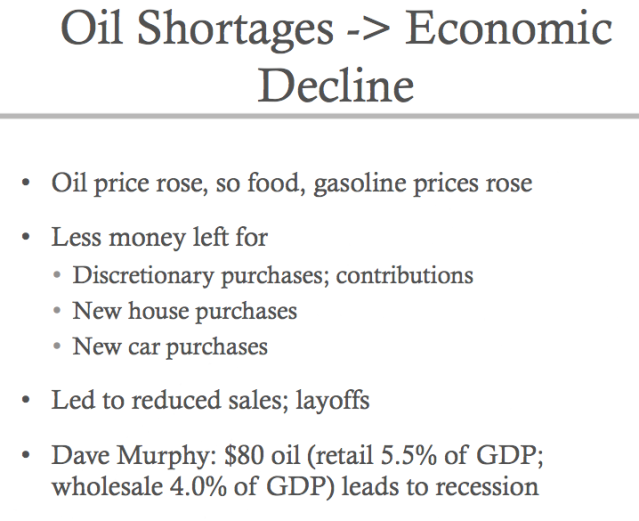 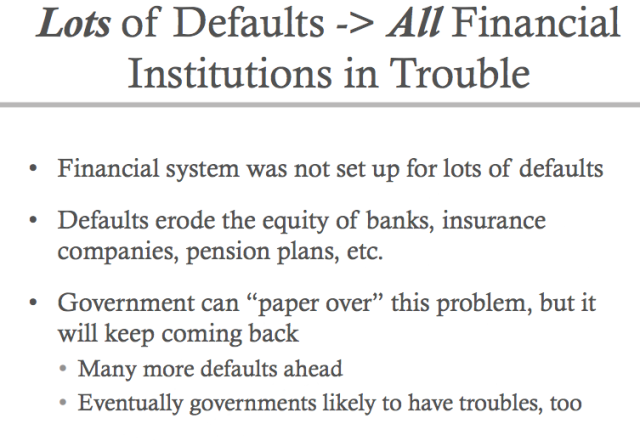 Many have observed that there would have been defaults, even without peak oil, because of the reckless lending that had been done. I would contend that at least part of the reason the lending had been done was to give the illusion of growth, when there really wasn’t much apart from that generated from very loose lending standards. Furthermore, even if loose lending standards were part of the problem, the problems related to peak oil made it worse (and can be expected to cause more problems in the future).

When there isn’t a problem like peak oil (or limits to growth in general), debt defaults are in fact pretty much independent. That is why the system for determining insurance charges to be included in the interest rates charged for loans worked pretty well until peak oil came along. In the absence of peak oil, a homeowner or businessman defaults because of some particular problems he or she has. Past history is likely to be predictive of the future, because while there are different individuals defaulting, the average number of defaults will tend to be pretty stable from year to year.

It is possible that there will be some loans in a declining economy, but their use will be much less widespread than we see today. Their cost will also tend to be higher. 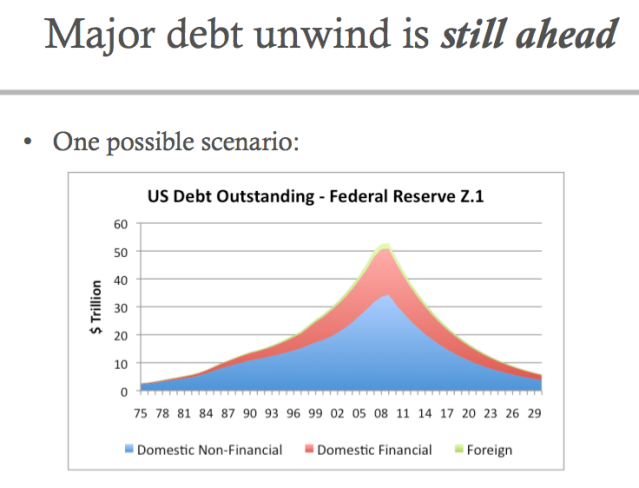 When lending is increasing, businesses have more money to invest in new plants and equipment and homeowners find it easy to get loans of new homes or for home improvements. 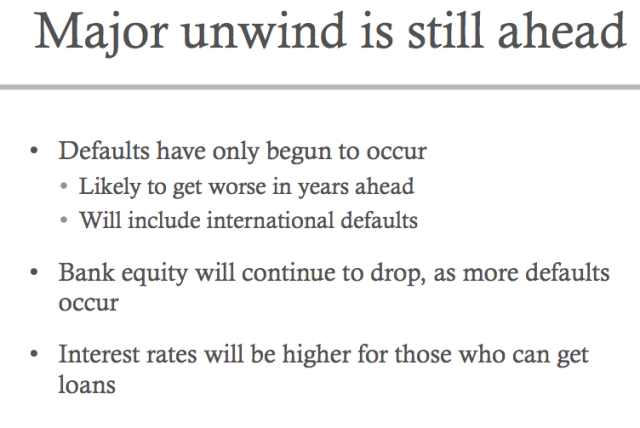 As countries cut back their stimulus funds, the decline in credit available may be especially severe. I noticed this article this morning:

Britain’s banks and building societies have warned that they will have to slash mortgage lending and raise rates on home loans if the government insists on prompt and full repayment of the £300bn they have received in state support since 2008. 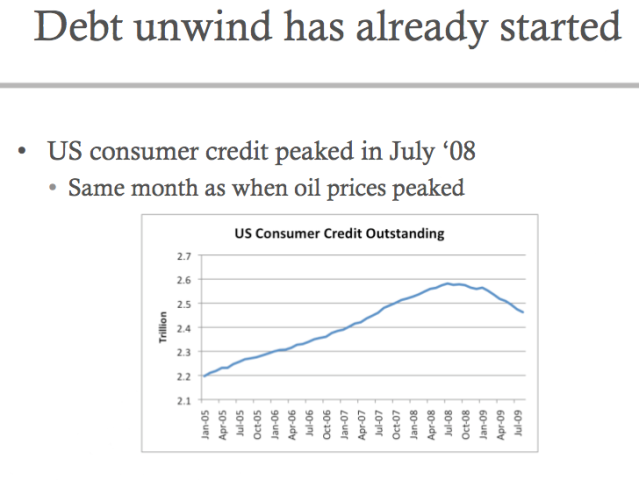 In the US, homeowners used their homes as a piggy-banks when home values were rising. They could refinance their homes, remove the built-up equity, and buy new cars, furniture, and other things. When there are fewer home buyers (because of less loan availability), and continually declining values, the effect is reversed. [Note: The decline in consumer credit outstanding has continued in 2010.]

Credit problems are really what are likely to spread the lack of oil to a much broader reduction in fuel use, essentially through growing recession. This recession may affect OECD to a greater extent than non-OECD, but there are such great links between the two that I expect eventually all will be affected. This reduction in fuel use is likely to be described in the press as “reduced demand”–which it is, but because of recession induced by credit contraction (ultimately going back to lack of growth in oil supply). 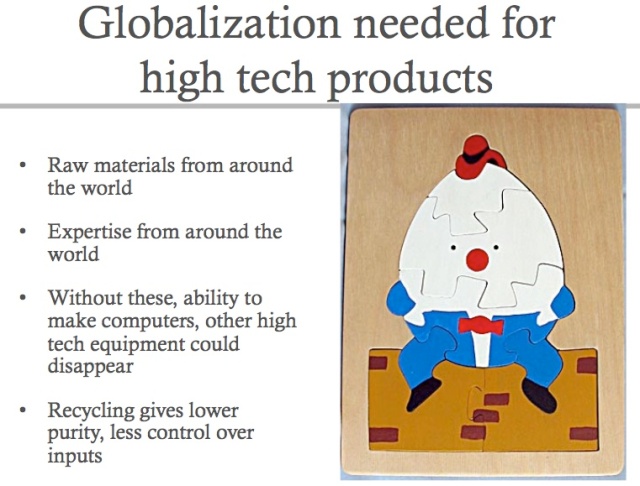 I am sure that some trade will continue, even if countries have financial problems. But it seems to me that a very large amount of trade is needed to keep up our system at the current level. High tech equipment would seem to be hardest to create with local materials alone. We can make simple things, like wheelbarrows and shovels with recycled steel, but it is not clear that precision parts for things like computers and other high-tech equipment can be made without exactly the right imports from around the world, and factories set up with the right controls.

These changes could start very soon. It is hard to know precisely how things will play out.

My name is Gail Tverberg. I am an actuary interested in finite world issues - oil depletion, natural gas depletion, water shortages, and climate change. Oil limits look very different from what most expect, with high prices leading to recession, and low prices leading to financial problems for oil producers and for oil exporting countries. We are really dealing with a physics problem that affects many parts of the economy at once, including wages and the financial system. I try to look at the overall problem.
View all posts by Gail Tverberg →
This entry was posted in Financial Implications and tagged peak oil. Bookmark the permalink.

20 Responses to Delusions of Finance: Why most models are wrong