(Note: This is a post I wrote which is published in today’s ASPO-USA newsletter.)

Recently when I was reading some of the papers M. King Hubbert wrote, one thing struck me was the context in which he made his forecast regarding how world oil supply would peak and decline. He made this forecast in the context of having plenty of other fuel supply from other sources already developed, to offset this decline. 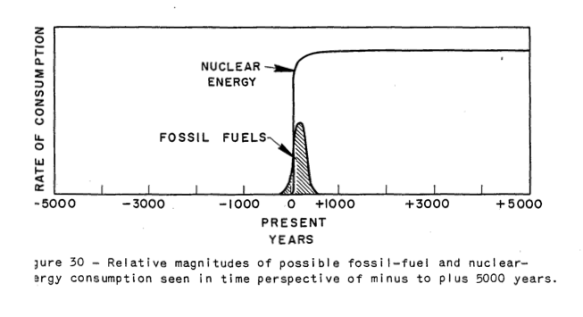 The three graphs shown in this paper are from Hubbert’s 1956 paper, Nuclear Energy and the Fossil Fuels. Based on Figure 30, it is clear that he expected nuclear energy to raise total energy production to a very high level, even before fossil fuels began to decline.

In his 1962 report, Energy Resources – A Report to the Committee on Natural Resources, Hubbert writes about the possibility of having so much cheap energy that it would be possible to essentially reverse combustion–-combine energy plus carbon dioxide and water to produce new types of fuel plus water. If we could do this, it would be possible to fix our high CO2 levels and produce lots of fuel for our current vehicles, even without fossil fuels.

The reason this high continuing fuel supply is important is because it means that there would never be a situation where there would be insufficient energy for food production and for industrial uses if fossil fuel use declined.  Because of this, his “Hubbert Curve” of world oil production only needed to consider geological conditions affecting oil supply decline, not indirect impacts that could also affect oil production.

The problem if there is not an alterative fuel supply that easily fills the role of the oil supply, then we start encountering many secondary, “above ground,” effects that also impact oil production, as soon as oil supply stops rising as fast as it has in the past. For example, oil prices can be expected to rise when world supply stops rising, and these rising oil prices can be expected to affect food prices as well. High food prices are one of the reasons today for political unrest in the Middle East and North Africa. High oil prices also tend to lead to recession and unemployment in oil-importing nations. Eventually, there is a possibility that without sufficient oil, it will be difficult to produce sufficient food for the world’s population.

Hubbert’s Curve still remains important because it provides something close to an upper limit to the amount of oil that can be produced. The reason I say “close to” an upper limit because there is still the possibility of technological advances, making new types of production economic. Experience to date shows that the role of these advances is likely to be fairly small, though.

If adequate substitutes are not available, there is an increased likelihood that the down slope in oil production will be affected by “above ground” factors that will make the down slope steeper than predicted by Hubbert’s Curve alone. When the book Limits to Growth by Meadows and others was published in 1972, it attempted to model the impacts of some of these alternative factors as well. Its indications were for a steep down slope, as various limits were met.

Hubbert does give some indication of the range of possible outcomes in his 1956 paper.

In Figure 61, “solar energy” seems to mean solar, wind, tidal, wood, biofuels, and other energy we get on a day-to-day basis, indirectly from the sun. His figure seems to suggest that solar energy would basically act as a fossil fuel extender, and would not last much beyond the time fossil fuels last. Another fuel, such as nuclear, would be needed to keep total energy production high for the long term.

Hubbert does not give us a “redrawn” Figure 20, taking into account secondary impacts if good fuel substitutes are not available, as fossil fuels decline. It seems to me, though, that if he had considered the special case of not having good fuel substitutes available, he likely would have had to adjust the right-hand tail of this distribution downward, taking into account the fact that secondary impacts, such as political disruption and lack of food and water, would likely negatively impact the amount of oil actually produced.  This would be difficult to do with any degree of accuracy, because of the many interactions going on at once. Analyses of the type used in Limits to Growth suggest that this downward adjustment could be very significant, however.

Because of these issues, it seems to me that we need to use caution in making statements like, “About half of the world’s oil supply will still be left, even when the world’s oil supply begins declining,” or “Oil supply will always be available, just at a higher price.” What Hubbert’s Curve does is provide an upper limit for what will be available; it really doesn’t tell us much about what oil availability will be based on real-world conditions following the peak. It could be quite a bit lower.