In my view, oil and gas resource limits are major contributors to the conflict in Syria. This is happening in several ways:

1. Syria is an oil exporter that is in increasingly perilous financial condition because of depleting oil resources.  When oil production is increasing, it can help an oil exporter in two ways:  (a) part of the of the oil supply can be used internally, to grow more food and to support increased industry, and (b) exports of oil can be used to provide revenue for governmental programs such as food subsidies, education, and building highways.  Syria’s population grew from 8.8 million in 1980 to 22.8 million in 2012, at least in part because of the wealth available from oil extraction. 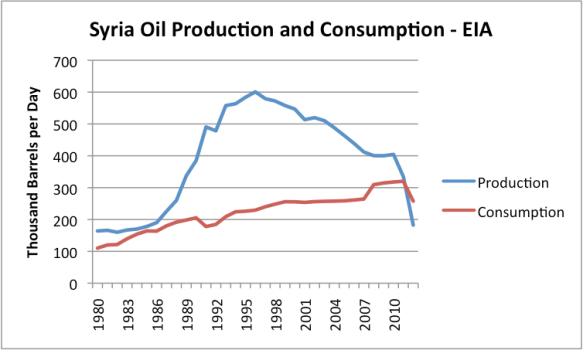 Figure 1. Syria’s oil production and consumption, based on data of the US Energy Information Administration.

When oil exports drop, the government finds itself suddenly less able to pay for programs that people have been expecting, such as food subsidies and new irrigation programs to support agriculture. If revenue from oil exports is sufficient, desalination of sea water is even a possibility. In Syria, wheat prices doubled between 2010 and 2011, for a combination of reasons, including drought and a cutback in subsidies. When basic commodities become too high priced, citizens tend to become very unhappy with the status quo. Civil war is not unlikely. Thus, oil depletion is likely a significant contributor to the current unrest. END_OF_DOCUMENT_TOKEN_TO_BE_REPLACED