To listen to President Obama, you would think that clean energy is our next salvation. But clean energy can’t exist on its own. Clean energy options should more properly be called “fossil fuel extenders”. They only work within a system that has fossil fuels.

Even corn ethanol is a fossil fuel extender. Corn is planted, harvested and transported using vehicles that use oil, and of course the finished product is mixed with petroleum products. Fertilizer and pesticides and herbicides also use petrochemicals, and ethanol plants are usually powered with natural gas or coal.

Wind turbines are only about 2% of US electrical production, and solar PV is well under 1%. Why aren’t school children and adults told about where our electricity comes from? The biggest source is coal, followed by natural gas. Nuclear is a very close third after natural gas. 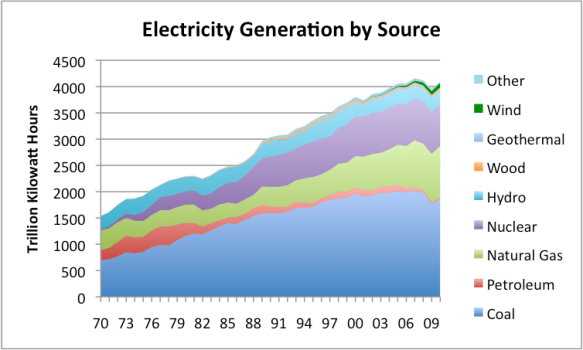 Figure 1. US electric generation since 1970 in Btus, based on EIA data

Our electrical system needs oil, too. Most of the workers get to work in cars; maintenance of transmission lines needs to be done using vehicles; replacement parts need be transported using vehicles powered by oil; oil is needed for lubrication.

Even if we had an abundant supply of electricity from wind and solar, that electricity wouldn’t run today’s cars, trucks, airplanes, and boats. They run on petroleum products, except for a very few electrical powered vehicles. The electrical vehicles we are looking to use to replace current vehicles use lithium, which is an imported product (requiring oil for transport). Sources are limited, and leave us open to some of the same issues of supply interruption as oil.

Taxing oil companies is a popular subject, but it is worthwhile thinking this through. Will doing this reduce the amount of oil that they pump, because fields that were at one time economic, are no longer economic? An example that is often given is all of the stripper wells that we have in the United States. They are typically owned by very small companies or individuals, rather than big oil companies. Together, they pump something like 900,000 barrels of oil a day out of the 5.5 million barrels a day of oil we are now pumping. These wells would likely not be profitable with higher taxes. They would just be closed. There are no doubt fields that big companies have in production that are marginal as well. Higher taxes might very well push the oil companies to close them.

Why not just import more? One issue is whether we really can. Imports have been declining since 2005, because world oil supply has remained flat, and because of more competition from China, India, and the oil exporting countries. It is nice to think that OPEC will supply more oil if we need it, but there is little evidence they can really raise their production by several million barrels of oil a day. Despite their promises, they haven’t done so to date, now or back in 2008, when prices were very high.

Whether we like it our not, we need petroleum products. If we don’t have them, we need to plan for a very different world. Rather than talking about clean energy, perhaps it would be worthwhile talking about what the world would look like with much less, or no, petroleum products. We have had an abundance of fossil fuel products in the last 200 years, but this will not continue forever.

Another thing we need to do is think through is what our economic system would look like with less oil. The oil intensity of the US economy has been declining by a shade over 2% per year. Even if this rate of improvement continues, we cannot expect the US economy to keep growing, if oil consumption (including imports) declines by a greater percentage, roughly 2% a year. Declines of greater than 2% a year in oil consumption seem quite possible–we experienced them in the recent recession. We need to think through what we need to do to change our economy, so that it can handle year to year declines in both oil consumption and economic growth.

President Obama, why don’t you start talking straight to the American people? Start telling the story as it is. Quit sugar coating the “clean energy” story. There is a very significant chance our oil imports will continue to decline from their 2005 peak in the near future, and we really haven’t prepared for this eventuality. There aren’t easy answers, but telling the truth would be a start in the right direction.

26 thoughts on “Clean energy won’t save the world!”