Rising oil and gasoline prices are of concern to many people today. I see three basic issues involved:

In my view, the biggest contributor to high oil prices is the first one–stalled out oil supply.  At this point, the interaction between oil demand and oil supply does not work in the way most people expect it would. Even if the price of oil rises, world oil production doesn’t increase by very much (Figure 1), if at all.

In the words of economists, world oil supply is relatively inelastic. This is true, even though the oil supply shown in Figure 1 is what is sometimes called “All Liquids,” so includes substitutes for crude oil, such as biofuels, natural gas liquids, “refinery gain,”  and any fuels from coal-to-liquid and gas-to-liquid processes. These substitutes are not growing by enough to make up for the shortfall in crude oil growth.

If we compare recent oil production with that in the 1980s and 1990s, we see that about 2005, growth in world oil supply suddenly slowed down (Figure 2). 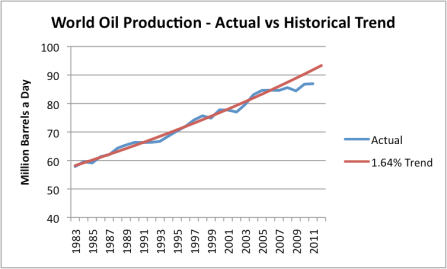 Figure 2. World oil production (broadly defined) based on EIA data, with exponential trend line fitted by author to 1983 to 2005 values.

Between 1983 and 2005, world oil supply rose by 1.64% per year. If world oil supply had continued to rise at that rate, oil production would have been about 5 million barrels a day higher in 2011 than it actually was. The fact that oil production has remained relatively flat since 2005 is the primary reason oil prices have continued to rise, except during the 2008-2009 recession. (This recession was to a significant extent caused by high oil prices–I wrote an academic article on this subject, published in the journal Energy called, Oil Supply Limits and the Continuing Financial Crisis, summarized in this post. Economist James Hamilton has also written on this subject.)

In recent years, emerging markets such as China and India have been increasing their demand for oil. If anything, it seems as if their huge additional demand would ramp up required oil supply even more quickly than predicted by a trend line from the 1983-2005 period. Instead actual production (and consumption) is lower since 2005.

Other Reasons Oil Prices Are High

According to the EIA, Iran’s top export destinations are China, Japan, and India. The EU and Turkey are said to import 650,000 barrels of oil a day, with one source in Turkey accounting for 200,000 barrels of the total. France and Britain are reported to account for very little of Iran’s oil exports.

Besides concern about exports, there is also concern that oil that might be delayed passing through the Straight of Hormuz. Currently 17 million barrels a day of oil passes through the Straight of Hormuz, with 85% of these exports headed for Asian destinations. While other routes are available, there would be delays and higher costs involved. Even if the delays do not directly affect the US and the EU, there would likely be indirect impacts on world markets.

The world clearly cannot get along without 2.4 million barrels a day of exports from Iran, although perhaps losing only the EU portion of those exports (about 500,000 barrels a day) might be tolerable for a time. While some oil from Libya is coming back on line, oil prices are still very high. In a world where oil production is not rising by much, any loss of production is a problem because of the adverse impact high oil prices have on economies of oil importing countries, including those of the EU, Japan, and the United States. Any loss of production also leaves us more vulnerable to disruptions if another oil exporter suddenly has difficulties.

Low interest rates. Low interest rates should theoretically not directly affect oil prices, but if alternative forms of investment do not provide a reasonable yield, this fact may affect oil decisions as well. For example, if prices are trending upward, there may seem to be a premium for holding oil off the market. If interest rates are very low, this will make the comparison seem even better. Thus artificially low interest rates would seem to reinforce an upward oil price trend.

Furthermore, if artificially low interest rates actually induce businesses and individuals to invest in durable goods, production of these goods will require more oil, as well as other types of commodities. But we have already seen that oil supply does not really increase by much, even with large price increases. Thus, because of this effect, low interest rates will also act to increase oil prices, at least until recession (because of high oil prices) hits again.

My name is Gail Tverberg. I am an actuary interested in finite world issues - oil depletion, natural gas depletion, water shortages, and climate change. Oil limits look very different from what most expect, with high prices leading to recession, and low prices leading to financial problems for oil producers and for oil exporting countries. We are really dealing with a physics problem that affects many parts of the economy at once, including wages and the financial system. I try to look at the overall problem.
View all posts by Gail Tverberg →
This entry was posted in News Related Post and tagged gasoline price, high oil price, Iran, low interest rates, oil price, oil production, oil supply, recession, world oil production, world oil supply. Bookmark the permalink.

97 Responses to Why oil prices are so high: Production shortfall, Iran concerns, and low interest rates