Governments and economists around the world have not figured out that what the world economy is suffering from, to varying degrees, is “high-priced fuel syndrome“.

High-priced fuel syndrome has a number of symptoms:

The countries with the most problem with high-priced fuel syndrome are the industrialized countries that are big importers of oil. This is the case because oil has been a particularly high-priced fuel in the past few years. Importing high-priced oil adds challenges of its own, since funds used for imported oil flow out of the country.

While oil is the biggest culprit in high-priced fuel syndrome, high-priced fuels of other sorts can play a role as well. Natural gas is recently high-priced in Europe and Japan, but not the USA. The higher natural gas price contributes to a higher average energy cost level for these countries.  High-priced renewables, such as off-shore wind and solar photovoltaic, can be expected to act in a similar fashion, because they add to the price challenge customers face.

At this point, Europe is hardest-hit by high-priced fuel syndrome. In part this is because Europe is a big importer of both oil and gas,  and both are high-priced. European countries have also encouraged the use of high-priced renewables, adding to their difficulties.

While many people have laughed at the issue of the world “running out of oil” (or natural gas, or some other substitute fuel), it seems to me that they have basically missed the point. There is always lots of fuel in the ground, or available through devices we create that produce “renewable” fuel. The major issue is that the fuel becomes too expensive for the economy to afford.

The United States, Europe, and Japan were industrialized back when fuels were cheap, in the pre-1972 era (Figure 1, above). The cost structure of government welfare programs (such as Social Security, Medicare, unemployment) also assume that the economy will continue as it did with low-priced fuels. Substituting ever more-expensive fuels can be expected to push a country toward economic contraction, reduction in programs that the economy can no longer afford, and the symptoms listed above. END_OF_DOCUMENT_TOKEN_TO_BE_REPLACED

Rising oil and gasoline prices are of concern to many people today. I see three basic issues involved:

In my view, the biggest contributor to high oil prices is the first one–stalled out oil supply.  At this point, the interaction between oil demand and oil supply does not work in the way most people expect it would. Even if the price of oil rises, world oil production doesn’t increase by very much (Figure 1), if at all. 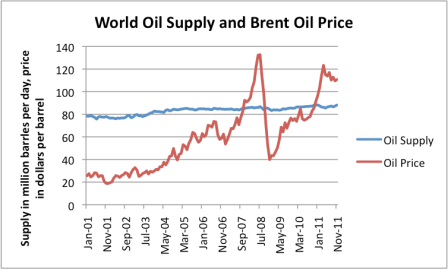 In the words of economists, world oil supply is relatively inelastic. This is true, even though the oil supply shown in Figure 1 is what is sometimes called “All Liquids,” so includes substitutes for crude oil, such as biofuels, natural gas liquids, “refinery gain,”  and any fuels from coal-to-liquid and gas-to-liquid processes. These substitutes are not growing by enough to make up for the shortfall in crude oil growth.

If we compare recent oil production with that in the 1980s and 1990s, we see that about 2005, growth in world oil supply suddenly slowed down (Figure 2).

Figure 2. World oil production (broadly defined) based on EIA data, with exponential trend line fitted by author to 1983 to 2005 values.