Newspapers in the United States seem to emphasize the positive aspects of the drop in prices. I have written Ten Reasons Why High Oil Prices are a Problem. If our only problem were high oil prices, then low oil prices would seem to be a solution. Unfortunately, the problem we are encountering now is extremely low prices. If prices continue at this low level, or go even lower, we are in deep trouble with respect to future oil extraction.

It seems to me that the situation is much more worrisome than most people would expect. Even if there are some temporary good effects, they will be more than offset by bad effects, some of which could be very bad indeed. We may be reaching limits of a finite world.

The Nature of Our Problem with Oil Prices

The low oil prices we are seeing are a symptom of serious problems within the economy–what I have called “increased inefficiency” (really diminishing returns) leading to low wages. See my post How increased inefficiency explains falling oil prices. While wages have been stagnating, the cost of oil extraction has been increasing by about ten percent a year, described in my post Beginning of the End? Oil Companies Cut Back on Spending.

Needless to say, stagnating wages together with rapidly rising costs of oil production leads to a mismatch between:

The fact that oil prices were not rising enough to support the higher extraction costs was already a problem back in February 2014, at the time the article Beginning of the End? Oil Companies Cut Back on Spending was written. (The drop in oil prices did not start until June 2014.)

Two different debt-related initiatives have helped cover up the growing mismatch between the cost of extraction and the amount consumers could afford:

Both of these programs have been scaled-back significantly since June 2014, with US QE ending its taper in October 2014, and Chinese debt programs undergoing greater controls since early 2014. Chinese new home prices have been dropping since May 2014. 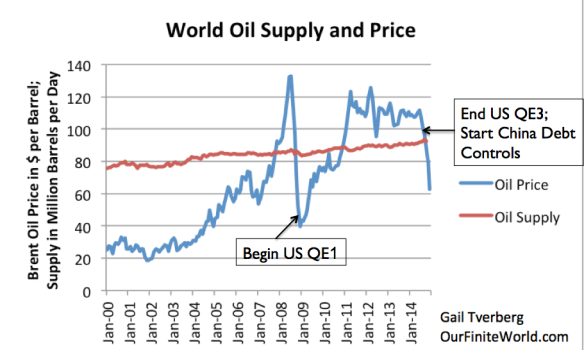 The effect of scaling back both of these programs in the same timeframe has been like a driver taking his foot off of the gasoline pedal. The already slowing world economy slowed further, bringing down oil prices. The prices of many other commodities, such as coal and iron ore, are down as well. Instead of oil prices staying up near the cost of extraction, they have fallen closer to the level consumers can afford. Needless to say, this is not good if the economy really needs the use of oil and other commodities.

It is not clear that either the US QE program or the Chinese program of infrastructure building can be restarted. Both programs were reaching the limits of their usefulness. At some point, additional funds begin going into investments with little return–buildings that would never be occupied or shale operations that would never be profitable. Or investments in Emerging Markets that cannot be profitable without higher commodity prices than are available today.  END_OF_DOCUMENT_TOKEN_TO_BE_REPLACED