We in the United States, the Euro-zone, and Japan are already past peak oil demand. Oil demand has to do with how much oil we can afford. Many of the developed nations are not able to outbid the developing nations when it comes to the world’s limited oil supply. A chart of oil consumption shows that oil consumption peaked for the combination of the United States, EU-27, and Japan in 2005 (Figure 1).

Figure 1. Oil consumption by part of the world, based on EIA data. 2012 world consumption data estimated based on world “all liquids” production amounts.

We can see an even more pronounced version of this pattern if we look at the oil consumption of the five countries known as the PIIGS in Europe: Portugal, Italy, Ireland, Greece, and Spain. All of these countries have had serious declines in oil consumption in recent years, as high oil prices have impeded their economies. 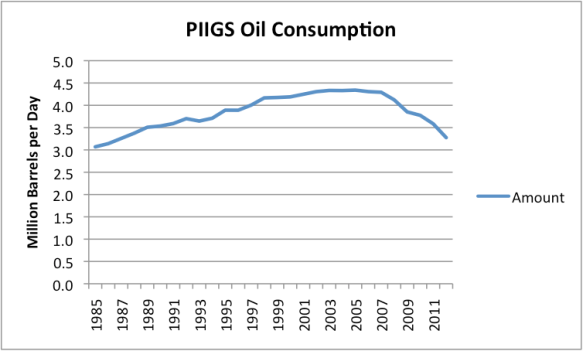