(This is Part 3 of my series – A New Theory of Energy and the Economy. These are links to Part 1 and Part 2.)

Many readers have asked me to explain debt. They also wonder, “Why can’t we just cancel debt and start over?” if we are reaching oil limits, and these limits threaten to destabilize the system. To answer these questions, I need to talk about the subject of promises in general, not just what we would call debt.

In some sense, debt and other promises are what hold together our networked economy. Debt and other promises allow division of labor, because each person can “pay” the others in the group for their labor with a promise of some sort, rather than with an immediate payment in goods. The existence of debt allows us to have many convenient forms of payment, such as dollar bills, credit cards, and checks. Indirectly, the many convenient forms of payment allow trade and even international trade.

Each debt, and in fact each promise of any sort, involves two parties. From the point of view of one party, the commitment is to pay a certain amount (or certain amount plus interest). From the point of view of the other party, it is a future benefit–an amount available in a bank account, or a paycheck, or a commitment from a government to pay unemployment benefits. The two parties are in a sense bound together by these commitments, in a way similar to the way atoms are bound together into molecules. We can’t get rid of debt without getting rid of the benefits that debt provides–something that is a huge problem.

END_OF_DOCUMENT_TOKEN_TO_BE_REPLACED

Oil and other commodity prices have recently been dropping. Is this good news, or bad?

I would argue that falling commodity prices are bad news. It likely means that the debt bubble which has been holding up the world economy for a very long time–since World War II, at least–is failing to expand sufficiently. If the debt bubble collapses, we will be in huge difficulty.

Many people have the impression that falling oil prices mean that the cost of production is falling, and thus that the feared “peak oil” is far in the distance. This is not the correct interpretation, especially when many types of commodities are decreasing in price at the same time. When prices are set in a world market, the big issue is affordability. Even if food, oil and coal are close to necessities, consumers can’t pay more than they can afford.

A person can tell from Figure 1 that since the first part of 2011, the prices of Brent oil, Australian coal, and food have been trending downward. This drop in prices continues into September. For example, as I write this, Brent oil price is $97.70, while the average price for the latest month shown (August) is $105.27. It is this steeper, recent drop, which many are concerned about.

We are dealing with several confusing issues. Let me try to explain some of them.

Issue #1: Over the short term, commodity prices don’t reflect the cost of extraction; they reflect what buyers can afford.

If oil prices drop, there is a temptation to believe that this is because the cost of production has dropped. Over a long enough period, a drop in the cost of production might be expected to lead to lower oil prices. But we know that many oil producers are finding current oil prices too low. For example, the Wall Street Journal recently reported, “Royal Dutch Shell CEO: Can’t deny returns are too low. Ben van Beurden prepared to shrink company in order to boost returns, profitability.” I wrote about this issue in my post, Beginning of the End? Oil Companies Cut Back on Spending.

In the short term, low prices are likely to signal that less of the commodity can be sold on the world market. Commodities such as oil and food are very desirable products. Why would less be needed? The issue, unfortunately, is affordability. Affordability depends largely on (1) wages and (2) debt. Wages tend to be fairly stable. The likely culprit, if affordability is leading to lower demand for desirable products like oil and food, is less growth in debt. END_OF_DOCUMENT_TOKEN_TO_BE_REPLACED

When I write about high oil prices having an adverse impact on the economy, quite a few readers respond by saying, “No, most (or all) of the problem is a debt bubble.” They seem to think that poor underwriting of mortgages a few years ago allowed a debt bubble. Once this bubble is past, or some similar bubble, our problems will be over.

I decided to see when the debt bubble really started. The answer surprised me–it appears that we have been building a debt bubble since at least 1945 (Figure 1 – based on Federal Reserve data). 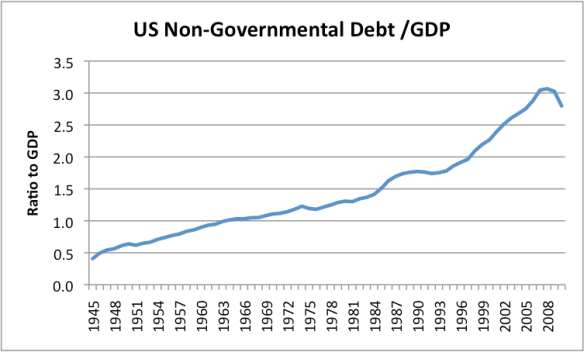 Furthermore, it appears that this 65-year bubble is beginning to deflate. I believe that this is occurring because high oil prices are putting a cap on economic growth. If I am right, it seems to me that the drop in non-governmental debt shown in Figure 1 can be expected expect to continue, possibly eventually dropping all the way back to the 1965 debt level–that is, about 15% of today’s debt level.

There is a close link between growing debt and growing GDP. GDP growth is a gross measure; it does not take into account the amount of debt required to finance this growth. The increasing level of debt since 1945 has enabled economic growth to be higher than it otherwise would be, and has allowed the US to buy goods and services from abroad that we could not otherwise afford. If high oil prices cause economic contraction, as I believe is the case, we may see the situation reverse itself. Instead of rising debt leading to growing GDP and growing imports, we may instead see shrinking debt leading to declining GDP and declining imports.

Such a situation would be bad from many perspectives–stock market prices, bond defaults, and ability to purchase needed goods from abroad. Commodity prices may drop as well, because many people are likely to be out of work. END_OF_DOCUMENT_TOKEN_TO_BE_REPLACED